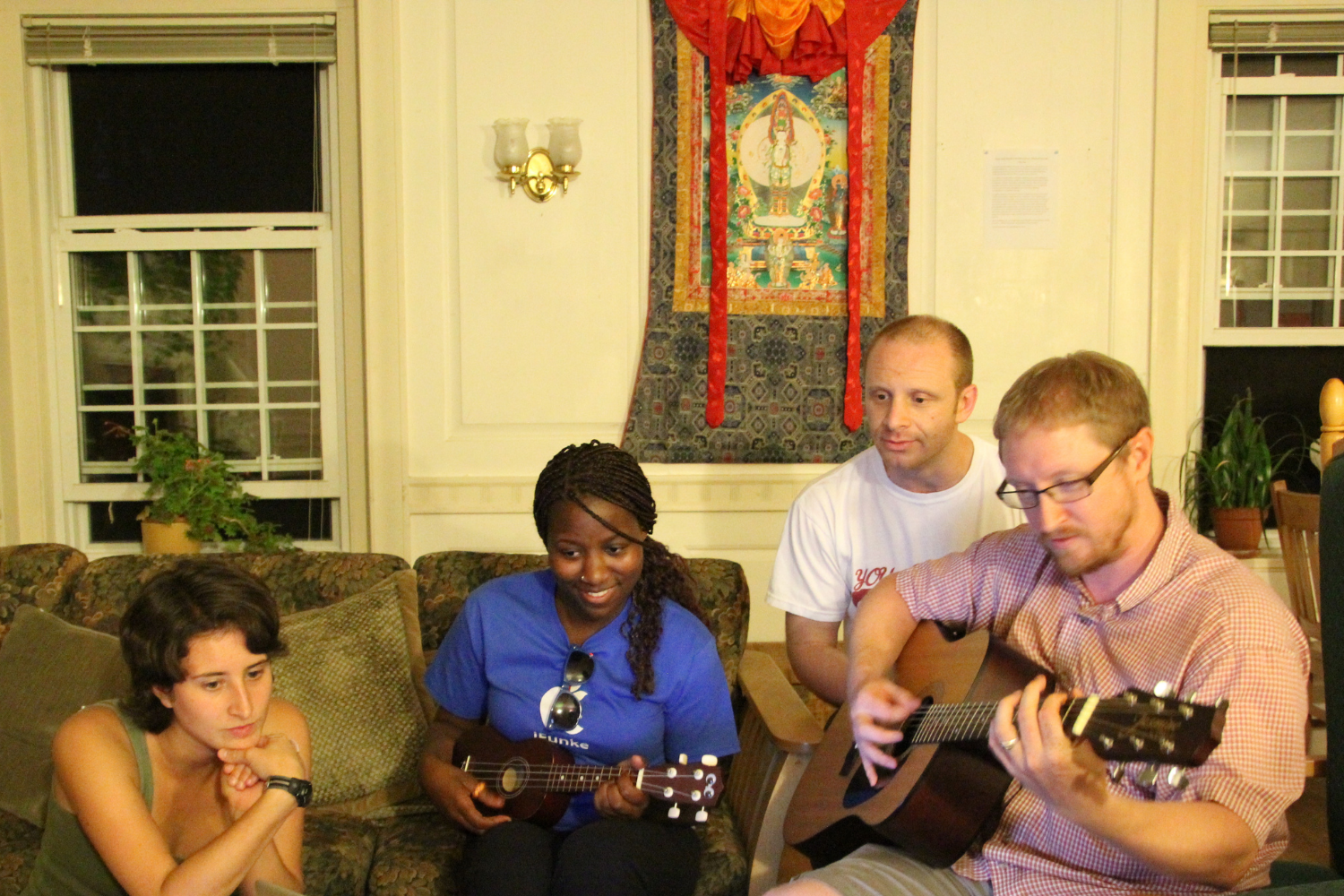 IMS has held a retreat for teens for the past 32 years. Psychotherapist and meditation teacher Jean Esther has been involved in this retreat for more than two decades—serving at first as a mentor, then for many years on the teaching team, and now as the retreat’s lead teacher.

Jean found meditation when she was 18 on a course at the University of Massachusetts. She sat her first retreat at IMS in her 20s and has been practicing in the Vipassana tradition for more than 40 years.

Her meditation teachings integrate psychological understanding and somatic awareness with Buddhist teachings on love and wisdom.

Here, Jean speaks with IMS Staff Writer Raquel Baetz about the beginnings of the teen retreat, why she continues to be involved, and the importance of sustaining this unique opportunity for future generations.

How did the teen retreat at IMS get started?

IMS’s teen retreat began in 1989. It started when IMS teachers Michele McDonald and Steven Smith were asked by their teacher, Sayadaw U Pandita, a Burmese monk, “How are you including your young people? You’ve got to teach them.” U Pandita believed that young people needed an environment in which they could learn how to deal with the vicissitudes of life with wisdom and compassion and where they could develop a sense of morality, and a commitment of non-harm in relation to themselves and others.

Thus began the teen retreat at IMS. Initially, the teachers and staff got some of their friends’ and colleagues’ kids to come. I think the first retreat had maybe eight young people. It grew from that.

I got involved about 10 years later as an adult mentor.

What prompted your involvement in IMS’s teen retreat?

In 1996, when IMS was celebrating its 20th anniversary, I attended the gathering on campus to mark the occasion. There were some teens there participating on a panel. One of them said, “If I had not found the teen retreat, I would be dead. I was suicidal when I got involved and that retreat changed my life.” I was very moved and deeply inspired by the retreat’s life-changing impact on this youth. I knew then that I wanted to offer my service to this retreat.

Why is it important to teach the Dharma to young people?

When you think of other religious or faith-based traditions, they have spiritual training for their young people. If the Buddha’s teachings are going to continue, we must include young people.

Young adults today are facing the impact of greed, hatred, and delusion in our culture in so many dire ways: climate change, imperialism, the impact of social injustice, and the fraying of a collective moral compass in our culture. When one has a direct experience of how the Dharma can lead to the mind and heart’s release from unnecessary suffering, how could you not want that for other people, particularly young people who are poised for greater levels of familial, economic, and social responsibility?

What do the teens learn from retreat?

While they are on retreat, the teens learn what it feels like to be in community. They get to share with each other and open their hearts. There’s a lot of learning about deep listening and respect for others and becoming more sensitive to how each of us impacts others.

These are hugely important skills in our world today, particularly as they’re on their screens all the time. They are asked to give up their phones on retreat and, for them, this is big. I’ve been so inspired by their willingness to do this. They’re willing to learn a whole different way of being with themselves and with others. One teen said to me after the retreat, “I don’t know if I want my phone back.”

Having this kind of introduction to what is possible—a way to live in the world—is very powerful. These teens don’t just learn how to be on retreat, they learn how to be in the world. This is a precious, priceless jewel that we can’t afford to lose. We need to keep devoting ourselves to learning how we can best share the wisdom of the Dharma with younger people as they head into the demands of adulthood.  It is so important not to give up on them, but to really support them in their lives. The Dharma has the potential to be a steadying life-long resource for them.

We take a lot of care with these young people, and they feel it. They’ve been touched by what’s possible living in a community committed to developing and manifesting wisdom and compassion and they’re so appreciative. Many of them experience something so different on retreat than what they experience in their high schools, where issues of belonging and not belonging can be so painful.

What is the format for the retreat?

The format is different than an adult retreat. The day is divided up with periods of formal sitting and walking practice along with group discussion, relational practice, and topic-oriented afternoon workshops.

Mornings are dedicated to a formal sit, walk meditation practice with some instruction. The sittings might be a little shorter than they are on adult retreats, but it’s conducted in full silence.

We meet twice a day in small groups—about eight young people with two adult leaders. This is something that the teens love, as do the adult mentors. These groups are the teens “home base” for the whole retreat. It’s vital to have that frame as they are integrating what they are learning from meditation and Dharma talks into relational engagement.

In these groups, they discuss the impact of their meditation and how they’re doing with it. This usually leads them to talking about what’s going on in their lives, including struggles in their family life, peer relationships, sexuality, varying ways they identify, experiences with alcohol, drugs, etc. It’s all discussed within the framework of mindfulness and how we can bring wisdom and compassion into our experiences whatever they may be.

The retreat usually takes place in June when it’s warmer outside, so they can bring musical instruments and play some light sports on the campus. We also have daily mindful movement practice. We have a wonderful yoga teacher. The teens are quite willing to engage and learn, even if they have never done it. It’s fun, and inspiring.

They sit again in the afternoon and then they get to choose a workshop to join. These include drumming, theater, visual arts, creative writing, nature programs, or discussion topics such as race, gender, or sexual identity issues, etc. They can choose which workshop most suits them on each day of the retreat.

We also offer lovingkindness practice every day as well as Dharma talks in the evenings. On the last night, we have a group campfire where the young people can offer something like writing, poetry, theater, or music. On the final day, we have a closing circle, in which the youth are invited to share their experience with the whole group. There’s usually not a dry eye in the house in bearing witness to this collective sharing of love and wisdom.

What experience do the adult mentors bring to this retreat?

We usually have about 22 adults running the retreats with about 63 young people in attendance. The adult mentors all have a Vipassana practice and have to have sat at least one retreat. They bring a wide range of experience, from the health professions, education, the arts, and more. Many of the mentors return year after year. It’s a five-to-six-day voluntary commitment which is powerfully fulfilling.

What brings you back to the IMS teen retreat year after year?

One of my greatest joys is working inter-generationally, which this retreat affords. Adult mentors span a 50-year age range—from mid 70s through mid 20s. The teens themselves range from age 15 to 19.

There is a deeply rewarding and rather unique sense of community, primarily because we rely on the Dharma, and everyone has a Dharma practice. This diminishes the ego negatively impacting our work together. Of course, there are some challenging issues that come up during a teen retreat, yet among us, adults and youth, there is a wise, caring, cooperative spirit that infuses our communal time together. It’s not an environment one encounters so readily in our conventional culture.

Why is it important that IMS holds teen retreats?

These are liberating teachings that these teens may draw on throughout their lives. This is a rich and vital lineage to share and pass on especially now given the challenges that our young people are facing in this current culture. They are the demographic that has been most affected by the pandemic, particularly BIPOC and LGBTQIA+ youth. If the mission of IMS is to share the Dharma, then it doesn’t make sense not to include our young people. If we don’t share these teachings with the next generation, they will die out.

What’s one final thing everyone needs to know about the teen retreat?

Teen retreats require much more energy and resources to produce and conduct than adult retreats. We need the support of the community for them to happen, whether it is financial or volunteering one’s time to sustain them.

Teen retreat teaching requires a specialization of skill to transmit the Dharma in a meaningful, nuanced way, with a clear understanding of the developmental tasks of young adulthood. I have great respect for the younger teachers who have committed to sharing the Dharma with this population. It is highly demanding and equally rewarding and yet can be under-supported.

My wish is that the Dharma community will contribute to the support of our youth and this retreat by reaching out to teens who you know or to teachers, coaches, and counselors who work with teens to let them know this is available. If you have teens in your life, tell them about this unique opportunity. IMS generously offers scholarships to attend so that no one is turned away.