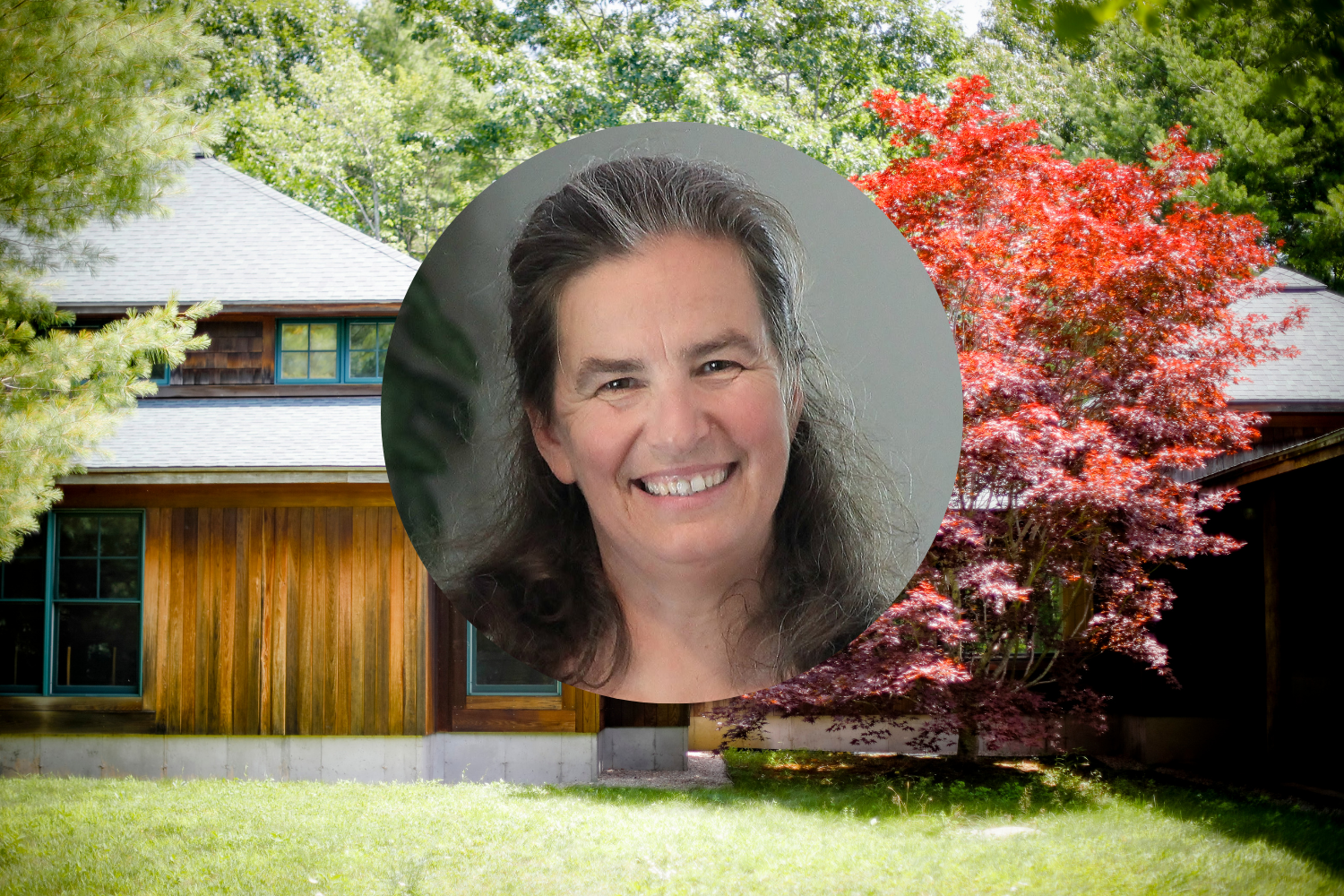 Retreats at the Forest Refuge: A Powerful Learning for Life

Caroline Jones has been practicing meditation since 1989. She began teaching meditation in 2006 at Gaia House in Devon, England. In December of 2015, Caroline moved to the U.S. to take up the role of teacher-in-residence at IMS’s Forest Refuge.

Here, Caroline talks with IMS Staff Writer Raquel Baetz about her path to the Forest Refuge, the opportunities and challenges of sitting a retreat in this unique environment, and what makes the space and experience special.

How did you come to be teacher-in-residence at the Forest Refuge?

Most of my meditation life had been at Gaia House in Devon, England. I did my teacher training there with Christina Feldman who was involved with IMS, including sitting on its board of directors. When the position at the Forest Refuge became vacant, she put my name forward. My mother was American and my husband is American. These connections made my transition to the U.S. a bit easier.

For me it was a good fit because I had been supporting personal retreatants at Gaia House for five or six years. So, I already had this experience of supporting people on retreat including those who were doing more self-guided retreats.

I’ve been here for more than six years. There aren’t many places like the Forest Refuge. It’s an extraordinary place, striking in all kinds of ways. Life here is good—the beautiful parts and the challenging parts.

What is the role of the teacher-in-residence at the Forest Refuge?

Most teachers at the Forest Refuge come for a month once or twice a year. I teach seven months of the year. The role involves supporting yogis and giving them continuity throughout retreats. Because I’m here a lot of the time, when people come back to retreat, they know me and that helps give them some stability when there’s a lot of different teachers and yogis coming and going.

I have an administrative role too, including overseeing and processing applications to the Forest Refuge. And I help the retreat support team. We support the yogis with whatever they need.

How does practice work at the Forest Refuge?

At the Forest Refuge, people are very much self-guided. It’s one of the challenges and opportunities of practice here. Input is minimal. The support is here if it’s needed, but in general it’s much less than on a group retreat.

So, there’s an opportunity for people to really find their own rhythm, drawing on their own resources more deeply. Again, they have guidance, but it requires a strengthening of capacity to be self-guided. People can sit in the hall or in their room and some will sit most of the retreat in their room.

Yogis are required to meet with each teacher once a week. We also have a discussion group once a week, which is optional. So, people can listen to others and share a bit about practice. We sometimes make extra time to meet with people if needed, but usually it’s twice a week.

We also ask them to come to a talk twice a week, one with each teacher. This gives us an opportunity to gather as a community and listen to the Dhamma together. And every morning, except Sundays, there’s some sort of offering in the hall. It’s an optional gathering, but many people take part.

There’s also a library which is unusual on a group retreat, so people can read a little to support themselves.

What are some of the opportunities and challenges with sitting at the Forest Refuge?

When some people first come here, it’s rather wonderful but also scary. They come in and think, “What am I supposed to do?” It can take a while to orient yourself to the minimal schedule. Other than showing up for your interviews and the talks, your time is your own and, for some, that can take some getting used to.

At the Forest Refuge, yogis must explore and experiment with the rhythm that makes sense for them. They are given the opportunity to hone a kind of sensitivity to what’s needed. They must discover what’s most supportive to their meditative process and that can be a powerful learning for life as well as for the retreat process.

When this format works at its best, there’s a feeling of being supported and part of a practice community but you’re also free to find your own way.

To come here and make the most of this space, you need quite a bit of experience of training and retreat experience and a willingness to embrace this spirit of exploration around what kind of practice works for you.

There’s a beautiful kind of unfolding that can happen where people come with ideas, expectations, and plans, and then they settle in for a few days, and kind of realize something else. Then they’re able to let go of the ideas they came with and a more appropriate, sensitive, relevant choice for them can be made. It’s a more organic process.

It’s also possible for someone to come here and have a very clear agenda and they get on with that, and we support them with that. There’s a lot of scope for whatever the yogis need.

Describe your approach to teaching at the Forest Refuge.

When I’m teaching, we have a theme, but it’s more general. I think of these as “open” months at the Forest Refuge, when there isn’t a particular practice that we’re teaching. We respond in the moment to what we’re interested in, touching on a range of core dhamma themes. And we listen carefully to what the yogis need. We try to shape the offerings in the hall to be flexible and responsive to what people are going through.

Yogis here are practicing in different ways—some are here for one week and others are here for six months—so when we’re speaking to the group, we have to remember that. Someone may be going through a crisis and another person may be in deep samadhi.

There can be a huge range of where people are, that’s why I value the open format, because everyone in the room may be in a different situation. The teaching has to be something that people can connect with in their own way and take from it what they want or just let it go because it’s not relevant for them at that moment. The teachers are here to support the yogis to take whatever is helpful to them and let the rest of it float away.

The months when I’m teaching people are coming and going every week, almost every day. The wonderful thing about that is that if there’s space and someone only has one week, they can come. During these open months, it’s more flexible.

What is a “themed” retreat at the Forest Refuge like?

The experience someone has on what I call one of the “themed” or “held” months is quite different than the experience they would have on an open month. I think that’s a good thing for people to understand. On the themed months, teachers teach in a certain way and the yogis are expected to follow that style of practice.

But yogis can be here across both formats and have the experience of both teaching styles over the course of one retreat. So, they have the challenge and the opportunity to deal with these sometimes very different teaching styles. But people who sit at the Forest Refuge know that this is the case, and the teachers know so they can support the yogis through the changeovers.

What makes the experience of sitting at the Forest Refuge so special?

To have the opportunity to come and sit with a teacher who you particularly appreciate for an entire month is really nourishing. The teachers often have a big following so there’s lots of people who want to come and just be with a certain teacher and have an immersive experience, both with that person and with this place.

At the Forest Refuge, people really get a deep dive and a very stable community for that time. Having that depth of experience with a teacher or teachers—particularly on a themed retreat—is special.

Is there anything else that you’d want people to know about the Forest Refuge or the experience of attending a retreat there?

There’s a lot of support available in the background when you’re here. There’s retreat support and staff and teachers, so though it may appear minimal, there’s a lot of us nearby and available. I hope that’s reassuring to some people because I think it can look and feel like you’re a bit on your own.

Also, there’s something about this place, the physical and built environment but also the animals, the trees, the forest—it’s like a teacher. People find support from the whole environment. It becomes like an extended dhamma hall. I feel like it’s one of the most important offerings—the Forest Refuge gives people a chance to connect to nature as a teacher.