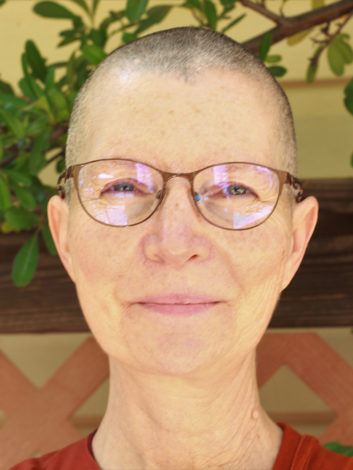 Ven. Dhammadipa has been practicing Buddhism since 1987. She became a resident at Aloka Vihara Forest Monastery in 2017, and began samaneri training in the Theravada Forest Tradition in the West in 2018. Her shift to the Theravada tradition is a natural extension of her longtime metta practice and study of the suttas. She also serves as the Guiding Teacher of Dhamma-dipa.com, an online sangha with students worldwide. Prior to taking up Theravada practice, Venerable was ordained a nun in the Soto Zen tradition in 2007, after 20 years of lay Zen practice. She is a Dharma Heir in the Suzuki Roshi lineage. In addition to English, Ven. Dhammadipa teaches in Spanish, an expression of her Latin heritage. She is a trained inter-faith chaplain, and has provided spiritual care in both hospital and hospice settings. Ven. Dhammadipa is mother to a lovely adult daughter, and enjoys watercolor painting and sewing.