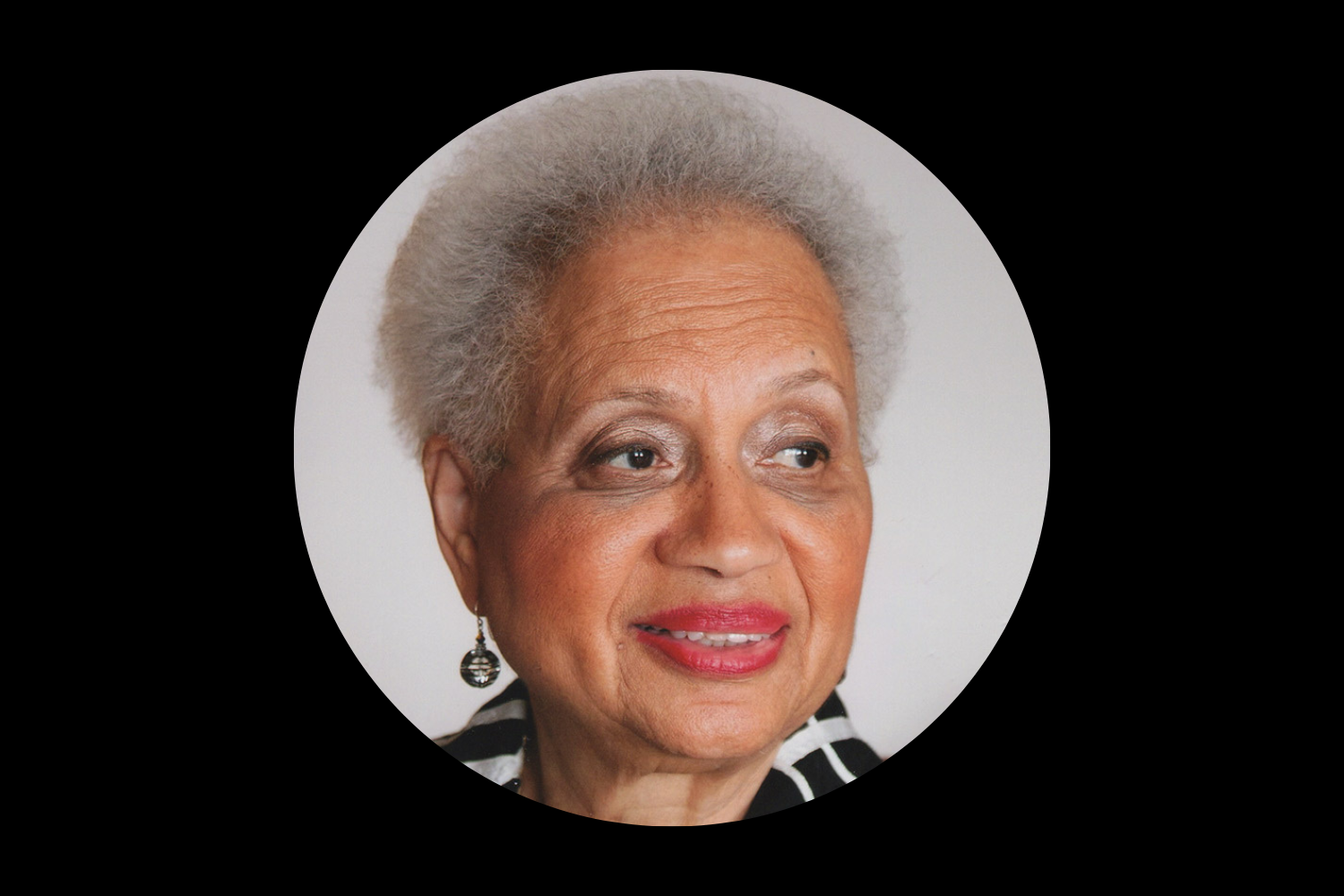 An interview with Hilda Richards, IMS yogi and donor

Throughout a career spanning five decades, Hilda Richards has consistently broken barriers and forged historic change, specifically in the fields of nursing and higher learning. Over the years, at numerous institutions and organizations, she has been dedicated to expanding what we refer to today as diversity, equity, inclusion, and belonging.

Born in 1936 in St. Joseph, Missouri, Hilda was inspired early on by her mother’s belief in the value of education. Nursing school was the first step in a trajectory that eventually included earning two master’s degrees (in health administration and psychiatric nursing) and a doctorate in education from Columbia University. Among many other accomplishments, Hilda helped create the nursing program at Medgar Evers College of Brooklyn in 1972, where she became chair of the health sciences division. This opened the door for her leadership roles in academic administration—often as the first Black woman ever to hold her position.

Hilda spoke recently with IMS’s John Spalding about her first retreat experiences at IMS, how she has seen the organization evolve, and how her meditation practice has supported her in navigating the challenges of a trailblazing life.

When did you first learn about IMS?

It was almost 30 years ago, when I was living in Pennsylvania. I was always drawn to meditation. I had tried meditation tapes—I used Shirley MacLaine’s tapes—and I went to a meditation group. But at that time, I was between jobs and under a lot of stress, and I was struggling with my practice. Then, in the spring of 1993, I read a New York Times Magazine article by Dan Goleman, in which he talked about this retreat center in Barre, Massachusetts. He described IMS’s annual Three-Month Retreat, calling it a “marathon of meditation”—day after day spent in complete silence, no reading or television, no communication whatsoever, not even eye contact. Days that consisted of alternating periods of walking and sitting meditation, from the wake-up bell at 5:00 am until bedtime at 11:00 pm. I thought, Oh, this sounds like the place for me. Somewhere I could be supported and really focus on my practice. So that Memorial Day weekend, I did my first retreat at IMS, with Larry Rosenberg [founder of Cambridge Insight Meditation Center].

How did that first experience impact you?

It was transformative for me. I was going into a new role as chancellor of Indiana University Northwest, in Gary, Indiana, as the first person of color in that position. You probably at that point could have counted on one hand how many Black presidents were on White campuses. It wasn’t easy, because I didn’t have an on-campus support system and many of the faculty were not happy having me there. The president of the university was supportive, but he was out in Bloomington. Gary was predominantly Black, but it was a White campus. How could we expand it and get more Black students? It was a challenge every step of the way.

In my first decade of coming to IMS, I went to a retreat every few months, to help me deal with what I was facing at work. I found that meditation helped with the bumps along the road—it helped me to remain centered and calm and to think more positively. To this day, every morning I do 45 minutes of meditation.

Who were some of your early teachers in those first years of coming to IMS?

I did retreats with Joseph Goldstein, Carol Wilson, and Kamala Masters, who I consider my teacher. In 2005, I did a retreat with Kamala and Steve Armstrong in Maui, where they live. Kamala is a wonderful teacher, and in addition she was the only teacher I had at that time who wasn’t White. In those days, I could be in a retreat with 80 other people, and I would be the only African American in the meditation hall. The people in the early Buddhist traditions of Asia were people of color, but meditation retreats in the West did not reflect that for a long time.

The people of color that started coming to IMS first were people of Asian or East Indian descent. Slowly we were able to attract other peoples, Hispanics and African Americans. Now I can look around in a retreat and I can see myself, which is wonderful. I have been really pleased with how hard IMS has worked to increase the number of teachers and meditators of color and the programming specifically for people of color—the Teacher Training Program and the BIPOC retreat. I was at IMS’s very first BIPOC retreat. When you are a person of color practicing with other people of color, seeing yourself reflected in those around you, you have a broader sense of yourself.

Over the course of my professional life, I was always with a majority of White people. So when I started going on retreats with all White people, I thought, All right, this is just more of the same. But IMS has really expanded from what it was when I started going there in 1993, just as much Buddhist teaching across the country has expanded since then. That’s what I always hoped for, and that’s what I see at IMS today.

You mentioned being in predominantly White spaces throughout your career, such as your chancellor role at Indiana University Northwest. That was true of your nursing career as well, before you transitioned to the academic world, and also your early education. You attended the first Catholic high school in St. Louis to be integrated, and then you became the first Black woman to graduate from St. John’s School of Nursing in St. Louis, in 1956.

That’s right, and at first the Mother Superior there said I couldn’t come unless I could pass for Mexican. And I said, “I have been colored for 17 years. If my parents find out that now I am something else, they would be very upset.” Well, I didn’t get in at that point. But I got into their sister school in Springfield, Missouri, and the nuns there helped me eventually transfer up to the one in St. Louis.

In many instances in my life, I was the first Black woman to do this or to do that. When I was at Ohio University, I was the first academic dean who was both Black and female. One of my associate deans, who was on the search committee when I was hired, actually told me later that they’d chosen me because the faculty wanted to be in charge. He said, “We had a double guarantee that we would have a weak dean, because you were Black and female.” And I said, “You don’t know anything about Black women, obviously.”

I was at Ohio University from 1979 to 1986, and then I became provost at Indiana University of Pennsylvania, second to the President. That was right before the chancellor role. My goal there was to increase diversity among the faculty, which was always a goal of mine throughout my career.

You were also president of the National Black Nurses Association (NBNA). Can you tell me about that experience?

In the late 1960s and early 70s, the organization was developing, and I was active in New York City in the chapter that developed before the national chapter. I gave a presentation at the first conference in 1971, and I helped start their publication, the Journal of the National Black Nurses Association. I was on the board and then I was asked to run for president, and I became the organization’s eighth president, from 1999 to 2003. We were working toward more visibility on the national level—we got on some national committees and at one point I testified before Congress. It was hard, because in the beginning the American Nurses Association (ANA), which was then almost all White, wouldn’t let us in. Over the years, they admitted us, but it took them a while to allow African Americans into leadership roles. Now the ANA actually has an African American president. I have been member of the ANA and in NBNA much of my life.

Are there other organizations that have been important to you over the years?

I’ve lived in Chicago since 2000, and I served on the board of the AIDS Foundation of Chicago for 15 years. I also did volunteer work for hospice and for the Art Institute of Chicago. I’m still involved with an organization called Transforming Re-entry Services, which helps people and their families as they transition out of prison. And I get out around the city. I have a cab driver who’s become a friend, and he’ll take me anyplace I want to go. I enjoy the symphony and the arts. The things that are close to my heart, that’s what I do.

Do you mostly attend IMS retreats online these days?

Yes. I used to go to IMS with my walker, and everyone was so helpful. But it’s such a big effort for me to travel now. My body has said, Enough of that. Time to stop making that trip. I do miss being at IMS in person. I miss the food there! But now I can tap into all sorts of different retreats. I do online day programs and longer retreats, as well as special programs and sanghas that meet regularly. I recently did an online retreat with Kamala and Steve, and I’m planning to do Joseph [Goldstein]’s hybrid online/residential retreat in May. It’s so interesting and rewarding to see the mixed composition of people from all over the world who join the Zoom sessions. I love seeing so many people from so many different places, and seeing young people, in their 20s and 30s and 40s, getting involved.

How does meditation continue to support you?

Following the Buddha’s teachings has helped me all my life. And now, of course, I have more time to meditate. I always sit in the morning, and I try to bring mindfulness to everything I do over the course of a day, from sitting and eating to moving around. You take an in-breath and an out-breath. And then one day, you release an out-breath and you don’t take another in-breath.