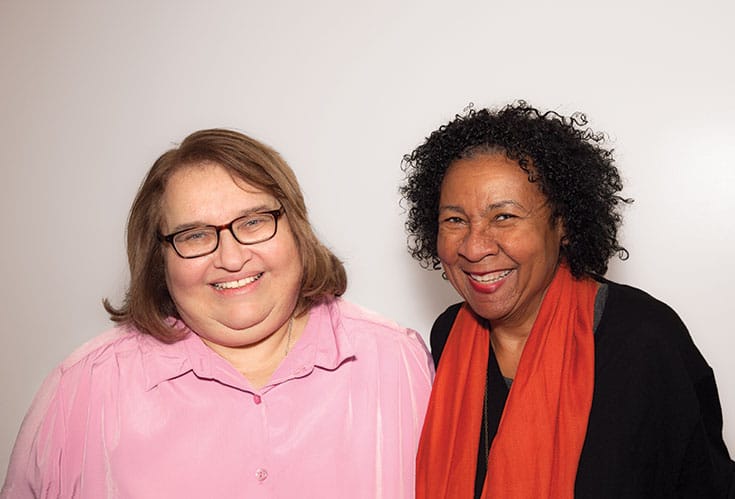 Through my great good fortune someone introduced me to bell hooks more than 20 years ago, when I first started to spend periods of time in New York City. She was, of course, a major champion of love—combined with scholarly rigor, demanding inquiry, fierce outspokenness at unfairness or assumption—and a good dollop of fun.

After some years, she told me she was moving back to Kentucky, establishing the bell hooks Institute in Berea. We completely lost touch.

About eight years ago or so, I was renting an apartment in New York City when something went awry in the building… a water shutdown or something like that. I checked into a nearby hotel, walked into the lobby, and there was bell. Thank you Con Edison, or whatever entity caused the problem that got me to the hotel.

From then on, I saw bell whenever we were both in New York, and I went to Kentucky a couple of times. In Kentucky once, at the Institute where we were having a public conversation, someone in the audience challenged what I was saying about others telling stories about us, stories that we might later absorb. He said, “They don’t know us, how can they be telling a story about us?” I responded by saying, “I think everything potentially tells a story about us, even architecture tells a story about us.” bell went on to give a potent illustration of who seems to belong and who doesn’t. Growing up, bell would frequently see a rich white gentleman who dressed up his dog in a coat and tie and sat him in the front seat of his car, while he kept his black maid riding in the back seat.

That left an indelible impression in young bell’s mind about how people who looked like her (skin color, gender, economic class) might be regarded, about her projected place in the world. In a way, telling a different story—resonant with the truth of belonging and laced through with love (sometimes tough love) became her life’s work.

It was on that same trip that we spoke about the book I was then writing, Real Change, which would combine inner work like mindfulness and lovingkindness meditations with outer work trying to make this a better world.  It was then bell told me she doesn’t use the term social action. I told her that I am well accustomed to the word parsing of Buddhist scholars, the excruciating care they take to differentiate one term from another, and the painstaking detail with which they will do that. I told bell I thought she had them all beat. She had a point, though.

For her, she said, social action calls to mind overt protests, like marches and picketing, and that might limit the range of effective responses one might have. The scope of possible action that can initiate change, that can move us to act in big and small ways, is far vaster than that. She suggested radical thinking, or radical practice. We then went on to talk about art.

That’s why the book included playwrights, artists, actors, whose work expresses exactly that. Thank you for that too, bell. I can readily see a connection between bell hooks and her radical thinking and Lynn Nottage, or Sarah Jones, or Arian Moayed.

Now with bell’s passing, reading so many tributes to her online, seeing so much on the news, I get some renewed sense of the vastness of those connections. And also the immediacy of it, if she played any role for you in mapping out the immense, challenging terrain of love and being inspired to explore it in real life. As she said, “I’ve always said that love is a practice, and like most things we practice, it is difficult. That truth contrasts with everyone thinking love is easy, but what about when we encounter people we don’t want to love? There are times I get up in the morning, and I think, ‘Okay. Who am I to love today?’ That is not a choice based on who I think is cute, or who I want to spend time with, but it’s the recognition of the hunger we all have for love.”